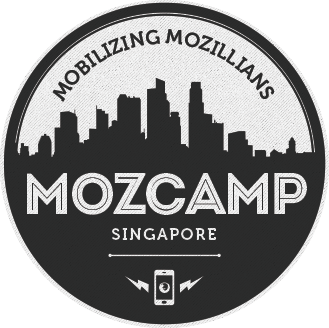 GoodMoring Blog reader,you all will notice I didn’t update my blog since finished #DevCon2012.I had been busy with my personal work and more contribute on Mozilla Myanmar . You will see more blog post at Mozilla Myanmar.And I have been writing blog posts for local press journal for offline reader 🙂

Recently I got invited from Mozilla to attend “MozCamp Asia 2012”. How pleaseure of life (La vie en rose).This time is second Mozcamp in Asia an This year’s theme is “Mobilize Mozillians”. Here is my mission (Ma Misson) for Mozcamp Asia 2012.

Link to My Mozillians/Reps/Twitter Accounts

It’s thanks to her that Mozilla now has a community in Burma (or the Republic of the Union of Myanmar)! Chit (or Akheno, her nickname) is one hip-and-happening Rep and WoMoz. She overflows with love and ideas. And she skillfully represented the Red Panda at #DevCon2012, the biggest developers’ conference in Rangoon. There she gave a talk on Mozilla Mobile and Firefox OS, and answered questions from the press with her characteristic enthusiasm. (See her report, here.)

After receiving her degree in computer science from the University of Rangoon, Chit studied at the Alliance Française in Rangoon (wow!), and now works as a web designer and developer. Chit is, in order, and in her own words: “CMS enthusiast, CSS3 junkie,Open source Lover and working with Drupal.” Her motto? “Don’t follow too much!.” And Chit makes us proud to be a part of the Mozilla community.

PS: Chit also made herself available for a WoMoz interview. Find her answers at the WoMoz blog, here.

Here is an interview of Chit, a fantastic Mozilla Reps in Myanmar, who has just participated to the #DevCon2012, the largest developers’ conference at Myanmar, Yangon.

My name is Chit Thiri Maung. Most people known me as “ahkeno”, which is my blog name. I got a Master Degree from University of Computer Studies of Yangon (UCSY) in 2010. In 2008, when I prepared my thesis, I worked in a web development company, Myanmar Technology Gateway MTG, as a junior web developer. It was the beginnig of open source’s use in our company.

Joomla was my first open source project and Firefox my first web browser. Being a web developer / designer, Firefox helps me a lot in my work with it’s addons and plugins. Firebug, Colozilla, Fontfinder are my favorite addons and I still using them.

Making / having open source community is one of my dream, when I attend several Barcamps in YGN, MDY and Bangkok. Attending Mozilla Thai session in 2010 Oct, which was held at BarcampBKK, was my first step into Mozilla Myanmar Community. I met William, Gen, Dietrich and all the Mozilla Thai community.

I started contribution by localizing Firefox in January 2011 and was with Arky at Barcamp YGN2011. I become MozReps in June 2011, when the Reps program starts. In September, I attended MozCamp Asia which took place in Malaysia and was the first Mozcamp in Asia. I was so proud to be there, representing Myanmar, and met the talent behind the avatar. Most of Mozilla staff, contributors and volunteers, met in the same place, shared ideas, hacked, and contributed to make web better.

After I came back from MozCamp Asia, I had so much enthusiasm by Mozilla contribution and got new dreams to attend the next MozCamp with our Myanmar contributors.

Now, I contribute to all these Mozilla projects:

The Mozilla mission: “Mozilla’s mission is to promote openness, innovation, and opportunity on the web.” Without Mozilla, I am sure we would not have things like Wikipedia and social networks. The web would have stayed a corporate tool.

We finished localization of Firefox Aurora: it is 94% done!

What would you want WoMoz to do in order to improve your life and experience in Mozilla?

Of course, WoMoz already helped me

They helped me a lot with community stuff and big encouragements. And also, I participated to Adacamp DC, in Washington DC, in July, because I saw WoMoz mailist and I got sponsor from Mozilla. The theme of that camp was Women in OpenSource and I attended it with Meleka and Lukas. As I said at AdaCamp, I came from “Listen and follow environment” and I want “Stand up, speak out and take action”, especially to our Burmese People.

And it is a good challenge to make action to the traditional women to the Open web! Big encourage from WoMoz and if possible monthly discussions,brain storming of what was past we done and what we will do future!

Do you have any ideas for WoMoz projects that you would like to launch?

It is my dream to have a community and to help people getting more education and improving their lives! Especially as far as I am woman – oh yes,obviously I am woman

– and working with open source .That means we have more struggle job opportunities and balance life other than normal women career. In my IT environment, there is not much more female geek! So, we need more women in open source and more women in geek projects. Mozilla and through Womoz communities can help to achieve my dreams.

Hello ! It been a little bit long time I haven’t update my blog! Sorry about this! These days I  had been busy with my work and I had exam for the first year French class! Fortunately I pass my French exam as one of the person who passed the exam among 5 person at the whole class 🙂 Another good news is I had been invited at Ada Camp and here is my interview for Ada Camp. Please read this interview before I add my News Blog post !

My name is Chit Thiri Maung, In Burmese community they known me as “ahkeno” which is my blog name and nick name.

Tell us a little about your home community and/or your work.

Currently I working as Web Developer working with open source CMS (Joomla, Drupal, WordPress) and PHP, Javascript, and CSS.Then here is my opensource volunteering project I’m leading for Mozilla Myanmar Community .We have been created at last year 2011 July. Now we have official website http://mozillamyanmar.org/. I also leading for Burmese localization at Mozilla product (like: Firefox Aurora).

What is (one of) your key open technology/culture communities or projects? What do you enjoy about it?

Open Source! I have been familiar with this words since 2008. I started work with on Joomla after finished my Master Degree. Joomla is first one I work on and Firefox is my default browser!

Last 4 years,In Myanmar we don’t have good connection and we gave expensive money for using Internet (expensive than these days). So we used internet at Cyber Cafe. First I start met with Firefox as Cyber Cafe. I start used it and like it so much! Lucky I didn’t start use internet with IE. Then days by days passed I work on Company, I used Opensource product every day, I delight to use Open source product. Then I started dream that’s open source community will grow up in Myanmar.

First I try was Joomla Myanmar Community.I made event at CMS’s camp Manadalay 2011 and talk/shared about Joomla at BarcampMDY2011.

After that’s I start work on Mozrep at 2011 June (this time). All my dream come true for I can make Mozilla Myanmar community. I spread out Mozilla Love with volunteers at BarcampYGN2012 and BarcampMDY2012.

One thing I proud to be Mozillian is, I had attend Mozcamp Asia 2011 at November. We met Super awesome Mozillian. Share ideas, learn each other and exchanging knowledge. Because of this empower, we made 93% of Localization with enthusiastic contributors.

I have lot of story about Open Source and Mozilla Love! All this stuff are summarize of my open source love 🙂
Here is my blogpost of Being Remo.

How has being a woman in your community changed during your involvement in it?

Before I answer this question.I want to talk about woman Aung San Suu Kyi. Hope Everybody know her! Being she is not from Technology field, she is the one I admire! Also another woman who I admirer : Mitchell Baker.

Talk on our Burmese IT Community, women are not too much. I’m the one who leading Mozilla Community. So everyday I faced challenging for working together with men.

Outside of your involvement with open technology/culture, what are you interested in and working on?

If I not working computer, I love talking with people, learning something (now I learn French), taking photos, travel sometime and hang out with my beloved MoM.